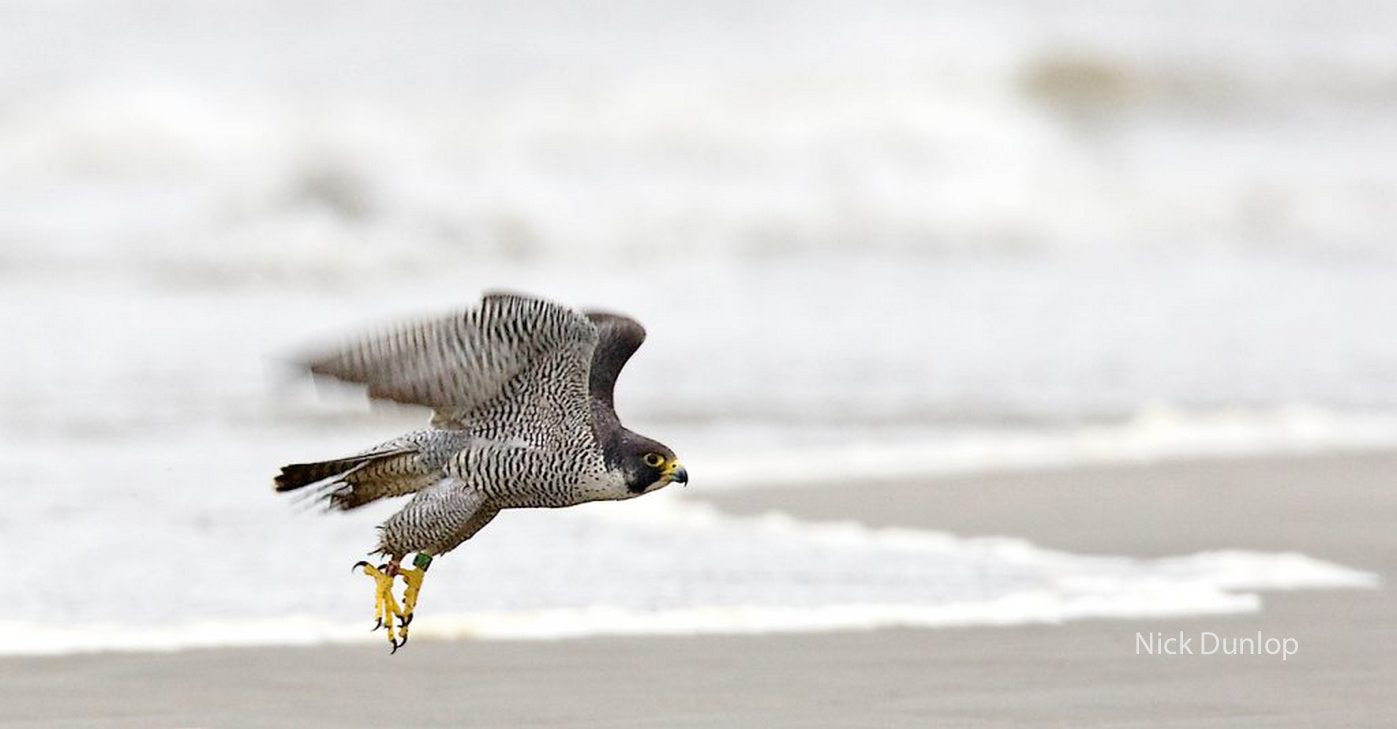 “Scientific research” often prompts images of white-coated scientists working under sterile conditions in indoor laboratories. Our “labs” are different. Set not only outdoors but along miles of sand highway (speed limit 25 mph), our beaches draw residents and tourists alike for recreation. Imagine working where others play.

But we do, trading microscopes for spotting scopes and not washing our hands before but after handling captured birds. Our research animals don’t live in petri dishes; they range widely. The falcons, eagles, vultures, and ravens we study and you see don’t care to be caught and handled. They are unpredictable and often fight back, but are enormously fascinating.

Our efforts are in the strictest sense “research science,” a phrase taken in light of the root of the term “laboratory” (“a place for labor or work”). Our research demands protocol-based study aimed at knowledge and understanding, a study requiring rules and regulations under two key categories, Regulated Research (Permits) and More Regulated Science (Publications).

State and federal agencies importantly review research plans before any project can begin. We do nothing without permits. We describe just three below with widening significance state to federal.

US Geological Survey Bird Banding Lab “BBL” Permits:  3-year “BBL” permits allow banded birds a place in the USGS’s Bird Banding Laboratory database. Formed in 1879, USGS has contained BBL under its aegis since World War II. Founded in 1920, the lab now holds more than 77,000,000 records. We have noted on our About Us page Coastal Raptors’ welcome USGS “Centennial” feature. We encourage your reading BBL’s Why Do We Band Birds? page. It helpfully describes Coastal Raptors’ aims.

Raptor Research Foundation: Founded in 1966, RRF is today “the world’s largest professional society for raptor researchers and conservationists.” Since joining the US-based society in 1979, Dan has published seven papers in its journal and served six years as associate editor. Beyond attending thirty annual conferences and serving seventeen years on its Conference Committee with many as chair, Dan has also co-taught RRF workshops on bird marking techniques, six in the U.S. and one abroad. For RRF’s Kruger National Park conference in South Africa in 2018, Dan played an indispensable lead role in its planning. For his hard work and his “inspiring” career service over many years, Dan received RRF’s first-ever Exceptional Service Award. In 2010 he earlier received the society’s President’s Award.

Wilson Ornithological Society: Aptly named for Alexander Wilson, “Father of American Ornithology,” WOS was formed in 1888, describing itself as “providing mentorship to both professional and amateur ornithologists.” Since his joining in 1975 with his first-year membership given free, Dan has returned the gift many times over through his own ongoing generosity. You can see as much on our Education page. With two papers now published in its journal and a WOS Annual Conference attended, Dan’s membership continues and, more importantly, his “mentorship.” Coastal Raptors has been his vehicle.

The Wildlife Society: Since 1937, TWS has become “an international network of over 11,000 leaders in wildlife science, management and conservation who are dedicated to excellence in wildlife stewardship.” Grounded in the wildlife management science begun by Aldo Leopold in the 1930s, its work has since spread broadly. Dan Varland first joined in 1993, and—with five conferences attended (one national and four state)—was recognized in 2015 with the Washington State Chapter’s Special Achievement Award. The award reads, “Recognized for career devotion to collaborative conservation of raptors through research, monitoring, and public involvement.”