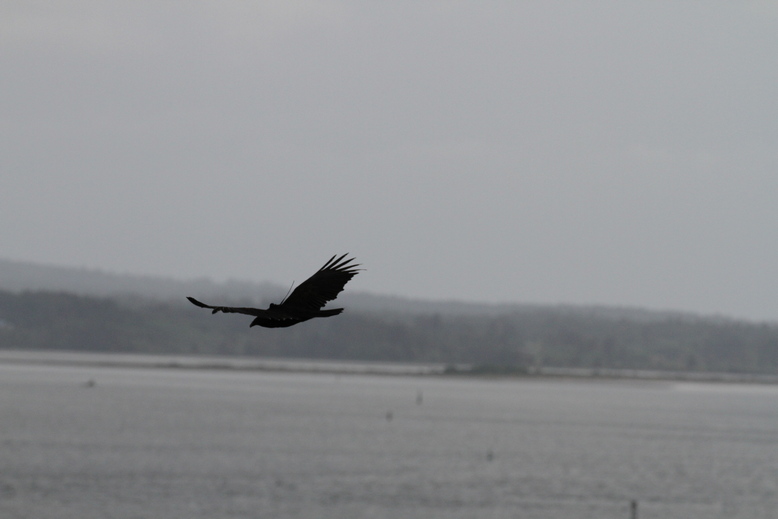 Maybe their mothers can tell ‘em apart, but to the human eye, most Turkey Vultures look pretty much the same. We need to be able to identify an individual bird to know just who it is, where it is, and what it’s up to.

With this in mind, in 2012 we began wing-tagging Turkey Vultures as part of a long-term assessment of the health of avian scavengers in the coastal Pacific Northwest. Our red tags with letter-letter codes are quite visible.  You can see them from afar with the naked eye. Use your binoculars, spotting scope or camera with telephoto lens to read the fine print!

Coastal Raptors and collaborators tagged 54 vultures from 2012 to 2016 on the Washington and Oregon coasts. As of May 19, 2022, 31 of these individuals (57%) had been resighted at least once, primarily by people not involved in the research effort who have reported their observations to the US Bird Banding Lab. These observations, 286 in all, reveal that many of our tagged vultures are long-lived and site faithful, returning in spring and summer to areas near where they were tagged.

We’ve even received reports on the whereabouts of a few of our tagged birds on their wintering areas. Winning the prize for traveling furthest among our tagged-only birds (no transmitters) is vulture AT, a bird that migrated to a location 80 miles northeast of Guadalajara, Mexico from its tagging site on the southern Oregon coast near north Port Orchard.

Airy flew 30 miles north to Quinault Indian Nation lands after release.  Two months later we stopped receiving signals from Airy’s transmitter. Our last transmission came from just outside Tahola, Washington. Coastal Raptors volunteer Glenn Marquardt and I drove to that location, finding elk carcass remains and a dead vulture not far away.  A Quinault Natural Resources employee who accompanied us to the site said at the time,  “They shoot vultures around here”. The dead bird was not wearing a wing-tag or a transmitter, so we concluded it was not Airy.  Nevertheless, we suspect that Airy was shot.

Annual movements of Turkey Vultures Artful Dodger, Grayland and Coy (they do not travel together) are shown below. The yellow arrows on the maps point to Mexico City, Mexico.  In the fall of 2022 Coy and Grayland made their fifth migrations to Mexico, wintering in the same areas they had chosen the previous four years.

Artful Dodger made two migrations to Mexico for the winter. In March of 2020, 643 days after the first transmission, Artful Dodger’s story ended when his remains were found on a cactus farm 30 miles northeast of Mexico City. Traveling for hours from their home in Xalapa, Mexico to the last known location was Kashmir Wolf and his wife Diana Balbuena. Kashmir, Veracruz River of Raptors Monitoring Coordinator, was asked to search for Artful Dodger by Hawk Mountain Sanctuary’s Director of Conservation Science Laurie Goodrich. Kashmir and Diana found several bones, feather remains, plus the wing-tag and transmitter; they did not find clues to the cause of death.