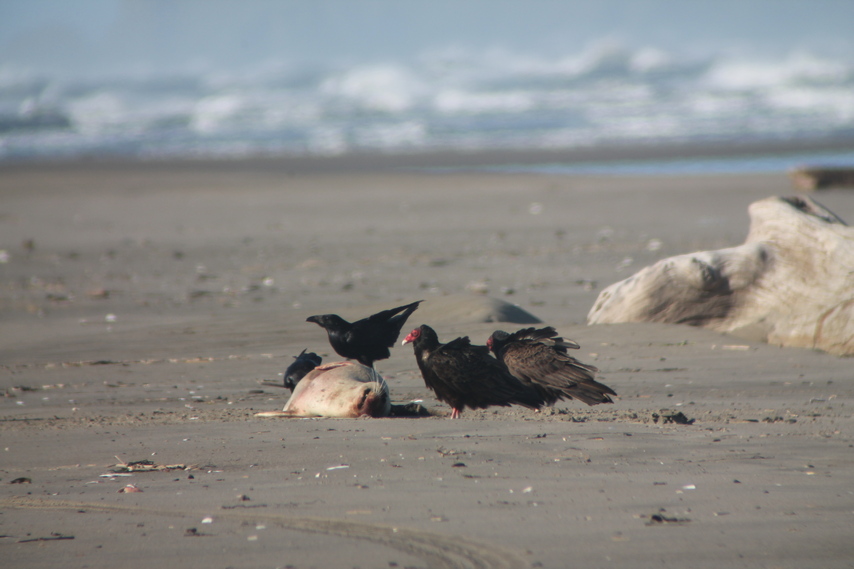 We begin this page by defining just what a scavenger is. Dictionary.com offers these alternatives. You find the best fit.

Of course most of us know what scavengers are and what they do. Best known among the scavengers are the vultures. Vultures are dependent on finding and securing carrion, dead organic matter, to survive. As such, they are known as “obligate scavengers.”

You might be surprised to learn that many other bird and mammal species rely on carrion as a component of their overall diet. These opportunists are known as “facultative” scavengers.

In 2011,Coastal Raptors and collaborators began work on a multi-year study to examine contaminant and disease exposure in three species of avian scavenger in coastal Washington and Oregon: the Bald Eagle, Turkey Vulture and Common Raven. These birds occupy important positions at the apex of the coastal food web. Accordingly, their health reflects the health of the larger avian communities in which they live.

An important goal of our research was to evaluate the risk of exposure to contaminated food sources in the critically endangered California Condor, a species targeted for reintroduction in the PNW as our project was getting underway. California Condors once occurred along the Pacific Coast from Mexico to southern British Columbia.

Years in the planning, the Yurok Tribe now leads an effort to restore California Condors to their former range in the Pacific Northwest. You can read about their efforts here.

We use a bow net (left two photos) or a net launcher to capture Bald Eagles, Common Ravens and Turkey Vultures for sampling.

We identify individuals captured for the research by fitting them with colored leg bands or wing tags.

Sampling for Contaminants and Disease Pathogens

Disease Pathogens. We’ve sent samples from 27 Turkey Vultures, 23 Bald Eagles and eight Common Ravens to labs to test for one or more of the disease pathogens identified below.

Results on lead and mercury exposure in Turkey Vultures and Common Ravens in the study are published in the journal Environmental Pollution. This research paper is available here and on the website Publication page.